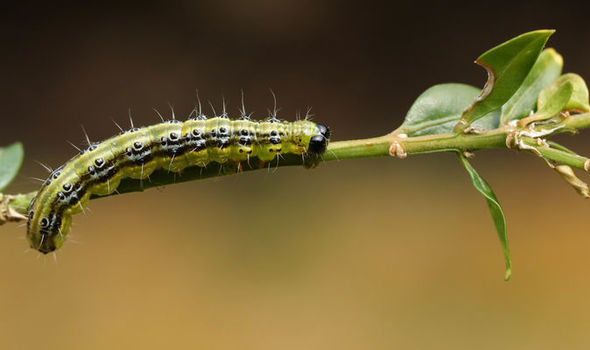 When you saw the title of this blog, you may have thought you were about to read a review of the Eric Carle picture book, however, I would instead like to talk to you about a garden pest which we are starting to see increased infestations of locally. (If this were a film, this is the bit where the music would be building up to a Dun, Dun, Derrr….) The Box Moth ‘Cydalima Perspectalis’.

Cydalima Perspectalis was not found in private gardens in Britain until 2017 and is now widely distributed, particularly in London and the surrounding areas.
Over the last 4 weeks I have visited two gardens in the Henley area with infestations of this little blighter in their beloved box balls and hedges.

The challenge with identifying the box tree caterpillar is that it feeds within a webbing attached to the stems and leaves inside the plant so it easy to miss at first glance and, as if it couldn’t get any worse, the caterpillars can completely defoliate a plant…i.e. strip it of all it’s leaves, leaving the plant a skeleton of it’s former self. And given the importance of topiary to some schemes, you can imagine the devastation that can occur.

So What can be done about this potentially devastating garden pest?

The first line of defence is good identification of the moths to see if you do have box tree caterpillar. The easiest way to do this is with pheromone traps. The traps contain a pheromone lure for male moths. If you find the Cydalima perspectalis moth in the bottom of the trap you will need to check your Buxus plants for signs of egg clusters and caterpillars. The pale yellow flattish eggs are laid sheet-like, overlapping each other on the underside of box leaves

My first thought in responding to the issue when the caterpillars were first identified in Lesley’s garden, was to think about increasing the natural predators e.g. birds, but, due to the toxicity of Buxus, birds don’t tend to eat the caterpillars.

The other natural predators for the box moth are reportedly the wasp and the recent visitor to the uk, the Asian hornet. Whilst wasps are a great addition to the insect life in the garden, we are likely to be able to increase the numbers sufficiently to get the caterpillar under control. (I will come back to talk about wasps another useful bug life another time).

My second thought was to consider organic controls of the pest i.e. nematodes. (I am not talking about enlisting an army of caterpillar catching amphibians to tackle the problem), nematodes are the most numerous multicellular animals on earth. A handful of soil will contain thousands of these microscopic worms, many of them acting as parasites on insects, plants or animals.

Nematodes can be beneficial or harmful. Gardeners use them as a biological control on many plant pests, such as slugs, chafer grubs, vine weevil and sawfly. But some nematodes, such as the potato cyst, also cause huge damage to crops.

Due to the repeat occurrence of this the box moth in her garden and the integral part buxus plays in her scheme, Lesley carried out a bit of research into other treatments for the problem and found a biological pesticide recommended by the European Box and Topiary Society. The pesticide is not considered harmful to humans or other pollinators, including bees (yay!).

So, due to the incidence of local infestations we have decided to conduct a comparative trial of the leading biological control and the organic alternative (i.e. nematodes) in Lesley’s garden and report back the findings to you here. So, keep an eye out for the next instalment!